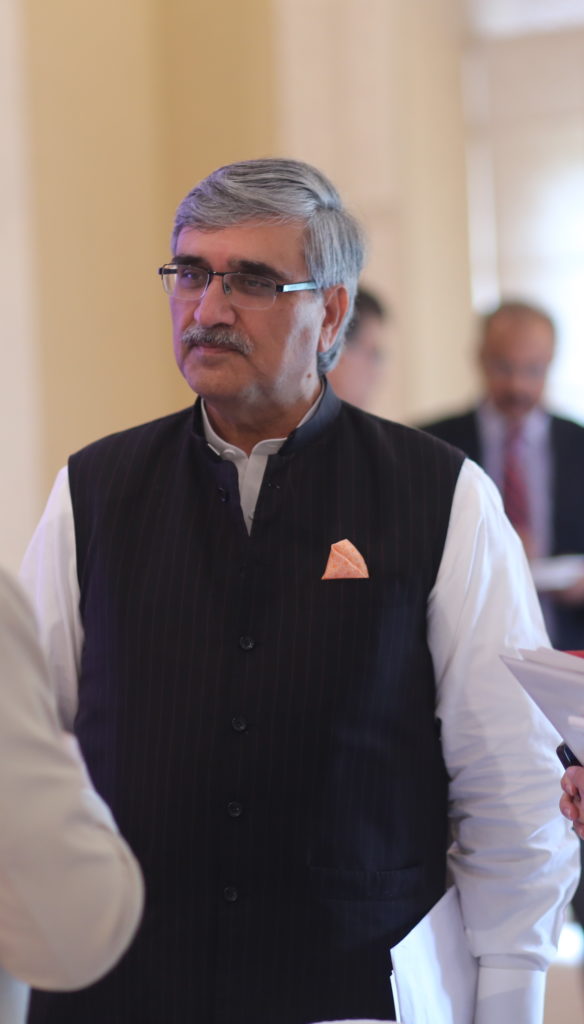 A civil engineer by education and training, Mr. Mehboob had a professional career in the Engineering profession in Pakistan, USA and Saudi Arabia holding senior management positions as Projects Director & Division Head. However, Ahmed Bilal Mehboob returned to Pakistan to answer his true calling to contribute to strengthening democracy and democratic institutions in Pakistan and established PILDAT as an organisation created and led by Pakistani citizens with a belief to strengthen Pakistan’s democracy and democratic institutions. Since its creation, PILDAT has, as a cardinal principle, employed and upheld its independence and non-partisan approach. It has very carefully ensured that its research agenda and analyses are rooted in open-minded inquiry reflecting diverse points of view. PILDAT is well-recognised as a serious and independent think tank in policy-making circles, across legislatures, and media within Pakistan and abroad which reflects Mehboob’s commitment to promoting democracy, peace and equality in Pakistan.

Mehboob’s special expertise lies in assessment of quality of governance and democracy, electoral reforms and monitoring, parliamentary performance and development, civil-military relations, strengthening political parties, leadership and political development of youth, promotion and assessment of the rule of law, right to information and much more. He is a thought leader and has set-up various eminent intellectuals groups to find innovative solutions to Pakistan’s problems such as the Dialogue Group on Civil Military Relations (DGCMR), Democracy Assessment Group (DAG), Governance Assessment Group (GAG), Citizens Group on Electoral Process (CGEP), etc. He has designed and conducted trainings and capacity-building courses on a large variety of policy issues for Parliamentary Leaders, MPs, Legislative and Government officials, political party office bearers and youth leaders, among others. Mr. Mehboob has employed exceptional networking and interpersonal skills in bringing various political parties and leaders to converge on various reform initiatives, in addition to successful efforts in bridging the perception and knowledge gap between the civil and the military, constitutional reform initiatives, reforms on internal democracy, legislative strengthening and various aspects of crucial public policies.

His key areas of expertise relate to the following:

Pakistan Institute of Legislative Development & Transparency-PILDAT (www.pildat.org) is an independent, non-partisan and not-for-profit indigenous think tank based in Pakistan. Founded in 2001, PILDAT also focuses on producing objective, research-based analysis on policies especially under review by the Parliament and the Executive. PILDAT focusses on political and public policy research, formulation of policies in the field of democratic governance, policy advocacy and capacity-building of national and provincial legislators, elected local government officials, political parties, officials of the executive, youth, women and media.

As a think tank, strengthening democracy and democratic institutions in Pakistan is PILDAT’s mission. Following are the flagship areas of PILDAT’s work:

Further details about PILDAT’s work can be obtained from its website: www.pildat.org

Mr. Mehboob designed, facilitated and led many regional and international Study Visits and engagements by bringing along eminent MPs and representatives of political parties. Many of PILDAT publications and studies have been shaped by these visits. Some of these have included:

Mr. Ahmed Bilal Mehboob has been invited to speak at various regional and international conferences and forums. Some of these include:

Mr. Mehboob holds a B.Sc. degree in Civil Engineering from the University of Engineering & Technology Lahore, Pakistan. His penchant for politics and commitment to democracy since his early life meant an active role in student politics. Mr. Mehboob was elected as President, Engineering University Students Union from 1971-1972 and also served as Chairman, Lahore Students Council in 1972. As President of the Students Council, he represented Pakistan as an official National Delegate at the World University Service General Assembly at Ibadan, Nigeria in August 1973. He also represented Pakistan as Joint Secretary, World University Service at Geneva, Switzerland in 1972.

As a professional Civil Engineer, he has worked in the Middle East and the USA holding senior management positions as Projects Director & Division Head. As part of his initiative to contribute to Pakistan’s development and serve Pakistan’s community, Mr. Mehboob first established the Pakistan Cultural Group in Riyadh, Saudi Arabia in 1985. Later, he pioneered the establishment of Institute of Overseas Pakistanis (IOP) to contribute to the development of Pakistan by bringing together a network of Pakistani professionals living and serving abroad. Mr. Mehboob served as founder Secretary General of the IOP. Various innovative steps were undertaken by the IOP including conceptualization and publication of monthly Pakistan Calling, an international and independent magazine for resident and overseas Pakistanis published by the IOP. Mr. Mehboob served as its Editor-in-Chief. Under the IOP, an Overseas Pakistanis Education Network – OPEN was set-up through which primary schools were opened across Pakistan in areas where no government facilities of primary education existed. Under the leadership of Mr. Mehboob, the IOP also established the Overseas Pakistanis Science & Technology City (OPSTEC), US $ 5 million project initiated and funded by Overseas Pakistanis to promote non-commercial education, training & practice of Information Technology in Pakistan.